KEWPIE is a native Kauri hull built in 1953 in the same year as the Queen Elizabeth's Coronation.

Built in Opua Bay of Islands. It has a colourful history with some of New Zealand's history in the making over its 60 years of service to now.

Originally designed and made for (Fullers) to cater for the increasing trade on the internationally famous Bay of Islands "Cream Run". Departing daily from (Russel) to visit the outer islands and pick up milk cans, as well as ferry passengers and mail. This commercial trip became one of NZ's most popular tourist attractions and soon the passengers numbers increased and tourism became bigger than the freight in revenue.

The name KEWPIE was its launched name by. Named after the vessels guide on the former vessel TED KEWBIT who in his own lifetime became one of NZs most famous guides. It is recalled that Ted was nicknamed KEWPIE by his peers at the local pub. He was one of life's rich characters, was short, ruddy and cheeky, with a swagger that made him popular with the passengers, adults and children alike.

Only when the vessel was launched and the champagne smashed on the bow by was the name KEWPIE revealed much to Ted's amazement and he was quickly overwhelmed by emotion. Ted died at (age) in 1957, the boat remains his legacy. 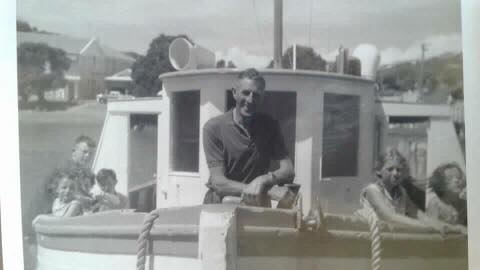 KEWPIE was again a working vessel, making the Mail Run Vessel from Auckland. Also making several trips to the Famous Kawau Island and Homestead owner by and frequented by equally famous person Zane Grey (royalty) with timber and iron for restoration work.

During service in Auckland the vessel Kewpie was renamed as Miss Motuhea. This radical change of name was the result (It was in service with Waitemata Ferries)

Fullers Kawau owned the vessel. Harry Juliean sold the vessel, it was up on the hard and had many of the original parts adrift, including parts of the engine room.

Fullers was going into receivership.

Purchased in 1988 by Mike Clothier with no engine. Mike installed the current

Regular trips were made to Great Barrier Island and Kawau Island.

Henry C bought the vessel in Auckland and brought her to Tauranga. The vessel made several trips back to Auckland but eventually stay in Tauranga and was deployed again as a Commercial operation taking people out on Cruises. It was a simple operation run with a chilly bin and a small stereo in the saloon.

Darryl Herbert bought the vessel. It was here that KEWPIE started to develop an ICONIC reputation for parties and hospitality. Darryl fitted the KEWPIE with several fridges and technology, a stereo system that ran through multiple speakers and flat screens with SKY digital channels. Anything could be played loud. Drinks were plenty and cold. On occasion the vessel was also used in summer periods for scenic harbor cruises. The tourist trade was imminent again and KEWPIE was poised for a re-launch into passengers sightseeing.

Bay Explorer bought the vessel. During the 2012/13 summer the 1hr Scenic Harbour Cruises became very popular and crowds cruised through the Tauranga Harbour daily to see the islands beaches wildlife and shipping, including the popular cruise ships. It was well supported by local residents and tourists from NZ and abroad. The round trip has become another iconic tourist event for the vessel.

KEWPIE runs this service now - Departing from the historic Pilot Wharf at the base on the Mount on the walking track.

Full renovation was completed over 13 weeks. Extensive work was carried out on the topside superstructure, with the pillars and bulwarks replaced as well as window structure and handrails. The vessel was extensively rewired with 230v and 12v/24v. Replacing all cabling within the cruise decks and wiring and fuse termination in the engine room. The entire interior lighting and amplification sound/PA systems were replaced. The interior had new upholstery fitted on all the cruise decks and in the saloon. A full repaint was completed with the new Blue exterior and traditional interior two tone colours.